Gorgonzola, the story of a distracted cheese maker…

Gorgonzola is a town just outside Milan and also the name of a very ancient cheese – there are historical records about this cheese dating from the fifteenth century.  Gorgonzola is a very ancient and very local cheese.  What do we mean by local?  Cheesemakers who have perfected the recipe kept it secret for centuries, making this cheese production a specialty of Lombardy.  Only after many centuries did information on its methods of preparation begin to filer outside the town of Gorgonzola, to neighbouring villages.  Even today the cheese is only produced in Lombardy and a few provinces of Piedmont.  Historical documents attest that, at least until 1840, the recipe was exclusively produced in the famous Lombard town and despite many attempts at imitation in other provinces of northern Italy, it could not be duplicated.  Gorgonzola production reached only a few provinces of Lombardy and Piedmont where it is still produced to day with great success, even if it is traditionally recognized with greater value in the zone of origin, even if only from a symbolic point of view today.  Indeed, there is a specific regulation for the production of this marvel of the Italian culinary tradition, so that all Gorgonzola production maintains uniform levels of quality, perhaps with slight variations yet faithful to the protocols which have allowed Gorgonzola to become world famous.

There are two types of Gorgonzola, one more creamy and sweet and the other harder with a more decisive flavour.  The difference is naturally down to aging: less than 50 days for the former, more than 80 for the latter.  Gorgonzola is a raw cheese of the stracchino variety, to which yeast and mould are added, such as edible varieties of the famous pennicillum.

According to legend, this special cheese was invented by accident, through forgetfulness or perhaps the innocent superficiality of a shepherd who, when passing through Gorgonzola, left a little curdled milk in a container and the next day he used the same container, accidentally leaving the curds at the bottom, to make a new cheese. Only after a few days did he realise that he had created something totally new, with unusual marbled veins and a very appealing flavour.  The rest is history.

This history has made Gorgonzola the star ingredient for risottos and as a condiment for pasta as well as main dishes based on meat.  It goes incredibly well with polenta, a pairing much appreciated in the provinces of Bergamo, Brescia and Lodi, although this delightful dish has now become widespread. It goes without saying that the true essence of Gorgonzola is best appreciated on a slice of fresh bread, accompanied by nuts, mascarpone and, if one wishes, honey. It can be washed down with a glass of very robust red wine: ripasso, nebbiolo or merlot. If one prefers to match it with a local wine, the best combination is with a DOC Oltrepò or a Valtellina Superiore, but as the Romans taught us: de gustibus non disputandum est… 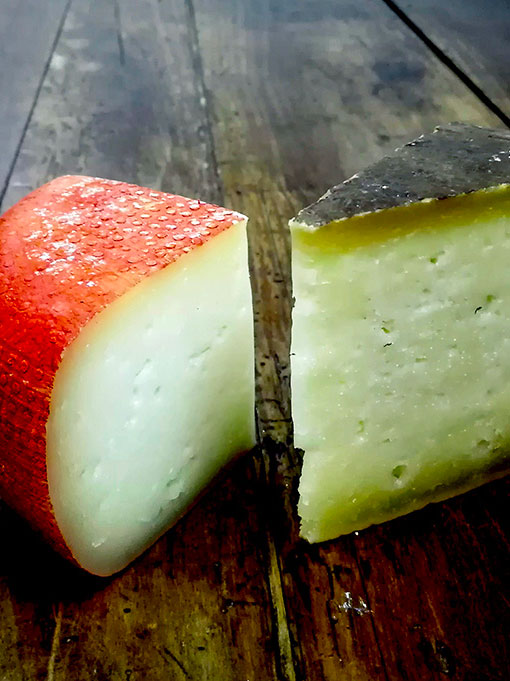